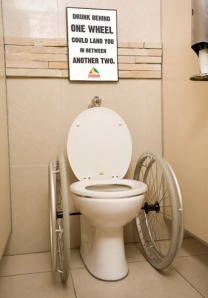 Here’s the thing: before you read this post, I want you to understand I am not one of those preachy “don’t have a glass of wine and then drive or you’ll DIE” kinda people. In fact, I’m quite the opposite. I think there are several factors that go in to whether or not someone is too intoxicated to drive. I mean, you have body weight, what you’re drinking, how long you’re drinking it for, and previous exposure. Now, don’t think that I’m saying just cause you’re used to drinking a keg all by your lonesome each night it means that eventually you’ll be able to do so and afterwards be sober enough to drive. However, if you regularly down a couple pitchers a few nights a week, after a few beers you’re probably not phased (or are-but barely). Now, if you NEVER drink at all, or very rarely like on special occasions only, you’re a lot more likely to be completely flat on your ass after pint #2. In conclusion END_OF_DOCUMENT_TOKEN_TO_BE_REPLACED

Yesterday I was reading one of my old issues of Cosmo and I stumbled upon an article that was discussing how traveling to foreign countries can be much safer for tourists if they learn local customs. Which, of course, makes a lot of sense. I mean, obviously what’s socially acceptable here (for example, women wearing itsy-bitsy mini skirts with barely there halters) in North America may not fly (and can even be dangerous to one’s well-being, or illegal) in other parts of the world. As much as some things may just seem to be common sense to us (no, it’s never OK anywhere in the world to egg a cop car – especially if there is an officer sitting inside of it), in some cases it proves wiser END_OF_DOCUMENT_TOKEN_TO_BE_REPLACED