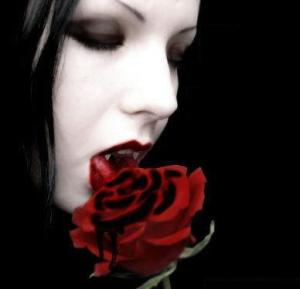 In the spirit of Hallowe’en, I figured it would be kinda fun to explore the topic of vampires. I actually took a course in college about vampires (honestly!…gotta love electives), but that focused more so on aspects of vampires in the media- things like Interview with a Vampire, or Bram Stoker’s Dracula. What I was more interested in exploring was this concept of “Real Vampires”…not only in determining whether there is historical evidence of the bloodsucking monsters we see in gory horror movies, but exploring this idea of the modern-day “real vampire”.

Despite finding numerous articles, both in journals as well as google (if you are interested in more links please ask, however I didn’t provide them because for the most part the information was redundant or based purely on speculation), which have vampires as their subject matter, I found no evidence whatsoever of the undead monsters we think of that seduce you by mind control and suck your blood. That being said, if any of the legends are true about vampires, then I’m sure they have already erased any memory of any vampire-human interaction and therefore any potential evidence there could be.

Now, as for real live vampires, there is much more information on that, especially in more modern times. One site I found that was informative and amusing (only in so far as the fact that it is a religious tolerance site with a vampire section) is here.

Pretty much, from all of my personal research both recently and from my college class (which was called Living with the Undead–did I mention that I was VERY impressed with this elective?) modern vampires are not monsters, and many of them do not need to drink blood. Some of them are “energy vampires” which means that they suck the life out of you, making you lazy and lethargic, while they grow stronger and more vibrant. Apparently this happens psychically, and some people depending on their strength don’t even need physical contact. Others say that many people are this type of vampire and don’t know because they are accidentally sucking the life force out of people around them.

I find this a very hard concept not necessarily to believe, however one that would be very hard to substantiate. You suck the ‘life force’ out of those around you….really? Ok, show me…uh, well its not visible, it happens psychichally….really? Ok, suck my life force then!…well, it doesn’t work that way, your spirit has to be open, and yours is closed… Not that I’m saying it doesn’t happen, but if I can’t see the process and I can’t see the evidence somewhere, somehow, then I have a very hard time believing it. Take a look at some real life vampires that were on the Tyra show…they’re definitely interesting to say the least.

part 2 I could not find in an embed format, so here is the link if you wanna check it out Part 3

And yes, there is a part 5 (just trying to be thorough) but yes, it too is in a link.

Now, this real life vampire discussion wouldn’t be complete without a discussion about porphyria. Porphyria is a genetic condition in which hemoglobin is not properly formed. Most relevant to our discussion of vampires, those with porphyria have very bad reactions to the sun, which cause their skin to burn and boil under its heat (however, it does not turn them to ash, soo….). For a more full description, click here

So, I guess in conclusion, my research left me with more questions than answers. One thing is for sure though: the idea of vampires has fascinated us for millenia and will probably continue to do so for millenia to come. Vampires are definitely back in fashion right now (literally), and with books like the Twilight series, Nightworld, and older classics, I’m sure the speculation and attempts at proving vampires to be real beings will continue as well.

What do you guys think of any of this? Anyone have more info that I didn’t add?? Share with the group 🙂