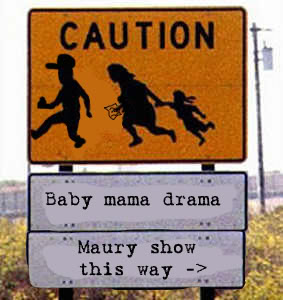 Many a time I have had a friend ask me questions about what they should do when it comes to their mate and their mate’s ex. People don’t come to me simply because I am so socially brilliant (although I’m sure that’s a part), but because I happen to be friends with most of my exes, and some of them have remained my very close friends. However, being childless, I don’t have as much experience in the baby mama/baby daddy realm. However, clearly there is more depth to the baby mama/daddy interaction, and at this age, and in this day and age, it’s very possible, if not probable, that you will some time in your life have to deal with the baby/mama issue, especially when it comes to what’s too close, what should be off limits, and when you should be worried that some diddling is afoot.

Baby Daddy Diddling (Baby Mama Diddling): This refers to a very special type of sexual interaction between a man and a woman, where two conditions must be met:
1. The couple must have at least one child together
2. The relationship must be officially over (on-again, off-again relationships do not count, as that can be taken simply as muddy waters between parts of the on-again relationship)

In this relationship phenomenon, the man and the woman who share a child engage in sexual acts with each other, regardless of whether or not they are in relationships with other people, and with no expectation or desire that the physical encounters will lead to a reconcilliation. Often, people who engage in this type of behaviour with their baby mama or baby daddy are otherwise not the type to sleep around, and if they are in a relationship will generally not cheat on their mate with anyone else.

The causes of Baby Mama/Daddy Diddling are unknown, and other than the above two conditions there can be a variety of other factors (or none that are typical) that are expressed by the parties. Some of those conditions can include: a tumultuous relationship between the parties involving many verbal arguments, insults or other put downs either directly to the party in question or to questioning friends or family members, a situation in which one parent (typically the Father) is a negligent parent or can be classified as a deadbeat otherwise but will show up occassionally to do something sweet (although minimal) for the other parent (usually the Mother) and child, or a situation in which one or both parties are otherwise driven to succeed (career, schooling, etc.) and does not have time to date or commit to a typical relationship but wants some sexual healing from time to time.

Due to the general secrecy surrounding Diddling, actual statistics involving its prevalence or it’s successful abolishment are unknown, although some sources say that when women can resolve their insecurities surrounding their baby daddy and pregnancy, and/or enter into a relationship which gives them a high level of satisfaction and in which they can be deeply connected to their mate that incidences of diddling decrease or disappear. Those same sources say that for men, dealing with issues of possession and protectiveness of their child’s mother, as well as entering a relationship in which they feel validated and “like a man” without the new woman becoming pregnant assists in diminishing or abolishing the need or desire for diddling.

You and your mate have a wonderful relationship, you laugh, you joke, you love, you talk. You are happy with them, and secure enough with them that when their friends call, male or female, you don’t even bat an eye. Oh, honey, you had drinks with that sexy new intern at your office tonight huh? Hope you had fun (but not too much now *wink, wink*). But yet you can’t help but inwardly cringe every time you see BABY MAMA’s phone number appear on the call display. ‘God, what does she want now?’ you think exasperatedly, trying your best not to let his overly welcoming tone of voice spoil your whole night.

It’s natural to feel jealousy towards your mate’s baby mama or daddy, even if you aren’t a naturally jealous person. What’s the difference? You know that they have an unbreakable bond (a child) and a special type of love for one another that you know you can’t compete with, and even if you two have a child together, you know that won’t shake the bond they have.  Even if they don’t necessarily get along (or all out war), the care they have for one another is apparent. But when should you start to worry? How can you tell if your mate is diddling along behind your back while you serenely tolerate a late night visit to the baby mama/daddy’s house because the kid “has a fever”? 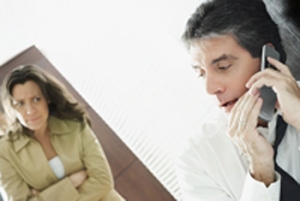 The first thing you should be aware of is whether there is any form of secrecy going on. When she receives the call from her baby daddy does she stay planted on the couch right next to you (or move into slightly away to not disturb your TV watching, but still within earshot), or does she go into another room and close the door? And when the conversation is over, does she come back and relay some of the details, or does she remain mute or start up a random conversation? If their conversations are for “parents only” and it’s apparent that the details of the conversation are intentionally being avoided, it could be that your mate knows that some (if not all) of the conversation crosses a line that you wouldn’t appreciate, and they could fear that either you hearing their side of the conversation, or them relaying the conversation to you could make you aware of this.

So what do you do? Best bet is to be upfront about it (remember the open honest policies? They apply when confronting your mate about their behaviour as well). Simply stating something along the lines of “Honey, listen, I know you guys have a lot to talk about when it comes to your daughter, and of course I understand he needs to call you and discuss her. But I feel like you are trying to keep me out of the loop, and I care about your daughter too and would like to be there for you (and her)”. Starting a conversation like this will open up the communication lines, as long as you remain unjudgemental and non confrontational. If she remains mute, or tells you that her kid isn’t any of your business, it could be a sign that not only is some diddling going on, but perhaps there are some deeper relationship issues going on.

Going into Ama-D mode is never a great idea, but in this situation it is most definitely a no no. And it may be especially tempting when all the secret phone calls are followed by sleepover nights “for the kids”, late night visits because he “hasn’t seen his kids all week”, and broken dates because “an emergency came up with the kids”. And no matter how suspicious this behaviour seems, no matter how sure they are diddling, Ama-D mode is only going to make things worse, because if you manage to find some things that are incriminating, you may also find some things that appear to be incriminating, but actually have legitimate grounds. And if that’s what evidence you confront your mate with, they now have a reason to not only be offended and defensive, but he now has evidence against you to prove that you’re crazy.

So what can you do? Honestly, not much. You can voice your concerns as before, however if these actions are legitimately for the kids, you really don’t have any right to ask them to stop. But, to protect yourself you can make some general observations. For example, if your mate is going over to his baby mama’s house to spend time with his kids, and they are under the age of 10, and it’s after 10pm on a school night, and this happens twice a week, every week, beware. If she has her baby daddy sleep over on special occassions (i.e. Christmas, New Years, birthdays, other special holidays) that’s one thing. If he is sleeping over at her house often, like once a week, that’s pretty fishy. Doesn’t he live somewhere? If he wants a sleepover with the kids can’t they go there for the night? And if he doesn’t, why can’t he stay til the kids go to sleep and then come over early in the AM? Unless he has some business there once the kids go to bed….and I’m sure it’s not her special pay-per-view channels, know what I’m saying?

What’s important in relationships is communication, openness, and honesty.  But just because you are making the effort to do those things doesn’t mean that your mate will be. However, if you make the effort to be upfront and voice your concerns and your issues, your mate should make the effort to meet you halfway. And no, there’s absolutely no shame in even making that known, as in “Honey, I am really trying to be open about this and let you know where I’m coming from, because I really want us to be able to just be honest and share with one another”. If your mate truly cares about you, they will be eager to jump on the bandwagon and discuss these issues with you, and may even be willing to compromise on some issues that perhaps they hadn’t realized were such a big issue and could make you so uncomfortable.

Thanks for checking out day 2 of my 3 day special. Stay tuned for tomorrow, when we cover a new surprise topic and then tie it all in together. Get your questions in now, you can do so by using the Contact Ruby link if you’re a little too shy.