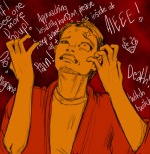 Ok, so to recap my week: Monday I learned that I hate York University, and I am SO glad I decided not to go there. After learning from their website I had to call in to cancel my OSAP application with them, I sat on hold for over an hour, only for them to tell me I would have to submit this request in writing. Ok, so I wanted to impress upon these people that I absolutely must have this cancelled ASAP so I can get my Mac OSAP. They assured me (and yes, I asked them several times!) that if I were to go directly to campus that they would cancel my application immediately.

So I arrive at the York campus monday around quarter to one. I wait in some stupid line for 15 minutes so they can tell me to fill out a form and drop it off in some drop box. I asked them how long it would take to process….they assured me it’ll be taken care of in 4-6 weeks. EXCUSE ME?!?!?!? I told her I need it cancelled immediately and that when I called in before they told me if I bothered to waste my gas and time to come down that it could be cancelled immediately. So then they assured me…ASSURED, can you tell thats the point of this story?….that if I spoke to some people that they would cancel my application immediately. So, I took a number and settled in.

Fast forward 2 very long, uninteresting hours later when I finally got to speak to some snotty little jerk who then very calmly told me that nobody will cancel my application effective immediately and that it will have to be processed (normally takes about 4-6 weeks or so) but he ASSURED me that this will be taken care of. Ok, so I’ve lost my patience and demand to see a manager…after a five minute or so discussion about the pros and cons of seeing a manager he grudgingly got off his duff to go get one…promptly returning to tell me that there wasn’t one available but that I could sit there like a dummy and wait some more…maybe eventually a manager would come out.

When I told him that this would not be acceptable, in the same stupid, calm, smug way he asked me, for like the tenth time “and what would you like me to do about that?” “Nothing you stupid &%$#!” “Well what would you like me to do at this point, ma’am?” he asked with the same jerky expression “Why, I would like you to cancel my frigging OSAP application!”. Ok, so maybe I wasn’t quite so…umm, forceful, but its pretty much what I said. I couldn’t wait anymore cause my mother had to go back to work, and since I have no money and probably won’t for the next couple months, I left with an ASSURANCE from him that the manager would definitely call me as soon as she returns. And, guess what, surprise surprise, still haven’t gotten a call.

Ok, sorry, this little I HATE YORK rant has gone on long enough, but suffice it to say that those stupid jerks are seriously impeding my ability to afford school right now. Sigh. Ok, I’ll finish my recap a bit later. Right now I need a stiff drink!! 😉
Just kidding….or am I?!?!?!? muah, ha, ha, ha, ha!! Ok seriously though, gonna go work out and then I’ll be back to recap the rest of the week.