So to entertain my friend, I decided to (finally) check out this site. After my first couple glances at it, I wasn’t particularly impressed, which is funny because the general concept is exactly the same as YKYDAW only all of these gems are actually taken from within the walls of a Wal Mart store (or occasionally from the parking lot). While I have a very hard time believing that each and every picture was taken at a Wal-Mart (I mean, seriously, how would they honestly prove that EVERY SINGLE LAST PHOTO was taken at a Wal-Mart somewhere in the world?) I decided to approach this site with an open mind, and any assumptions I was going to make would be in favour of PeopleofWalMart.com.

Ok, so looking at the pictures, there’s nothing super spectacular or funny about them. I mean sure, they catch a good one here and there, but overall they’re just ‘there’, you know what I mean. What I find most impressive is that (and this is sticking with my initial, in favor of People of WalMart.com attitude) is that so many strangely (or horribly) dressed people frequent these stores. As you can see on the page, clearly you wanna ask some of these people “Seriously? Did you look in the mirror before you left your house today? Yes? THEN WHY IN THE WORLD DID YOU COME OUT OF YOUR HOUSE LOOKING LIKE THAT?”.

Dear white people, none of you look good with cornrows! Just stop it. You don’t see black or latino people with bowl cuts, because they know better.

Ok, I have to give my friend credit (honestly, most of the time i give her very little :-p) the best part of this site, the one thing that makes flipping through the pages actually vaguely worthwhile is the commentary listed under each picture. Some of them are awful, but some of them are just covered in comedic and literary brilliance, and you feel compelled to stand on your couch shouting “Bravo! Bravo!” because you stand in awe of commenter 259’s amazing sense of witty-ness and cleverocity (I think I’m gonna coin that one — cleverocity…I like the sound of that!). Anyway, the funnest part of this page, of course, is seeing which state the Wal Mart picture was taken in so that you can find out if Weirdo-in-pink could potentially live down the block from you. Which kinda sucks balls, cause for God knows what reason, American’s feel that by saying something is from Canada, it’s the same thing as saying something is from Florida. 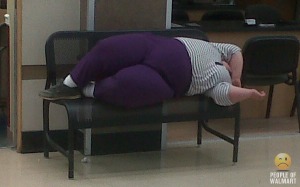 Do you have any idea how tiring it can be putting on purple sweatpants like this? I’m going to take a nap right now just from thinking about it.

I understand guys, its so super challenging, but we don’t have states so we must be SOOO small that there’s about 200 of us, we all live in igloo’s that are walking distance from one another, and yeah, there’s only one of everything up here (only one major city, major restaurant, major department store, one guy named Bob who happens to work in the one office we have). Or maybe, is it that American’s feel like Canada is another one of their states. Hmmm….Ok, no matter, we have Provinces, there’s not that many, so I’m pretty sure most Canadians would appreciate if you learn more than “Ontario” and “BC” (which is only very recently known due to the Olympics…and I doubt Ontario is as well known as anything other than home to our “capital city” of Toronto(our actual capital is Ottawa, just so you know), which is where every American I have ever met asks me if I am from, very proud of themselves for knowing the name of one place in Canada – congrats, dude). There are SOOO many huge cities in each province that each have several Wal Marts, but fine, forget those little details. Just give us at least the province. I’m sure the person who submitted it gave you city, province, country, so how hard is it to just add those itty bitty little keystrokes in? Come on guys, we wanna participate in the “I wonder if Freaky-Fatty-Fat-Fat lives in THIS neighborhood?” funfest too!

But then I digress… 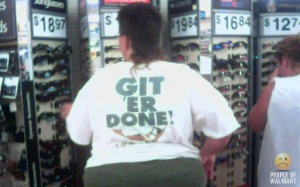 Oh yeah, what all did you “get done” today? Did you somehow manage to drop your kids off at your sisters and go pick up that pack of menthols?

Ok, so obviously 2010 is gonna see that I can’t even give a simple web site review without going off on some tangent. It’s gonna be a good year!

2 thoughts on “People of WalMart”