Ok. So it doesn’t count as news. Primarily because nobody was anywhere near surprised. I’m pretty sure only little old ladies believed that Ricky Martin didn’t at the very least swing both ways. In fact, he was so acceptedly gay that nobody so much as ever brought it up ever again. It was just a non-issue. It became one of those “OMG Ricky Martin is so gay” “Ummm…yeah. So? Gay people act gay. Fag!” kind of moments. Anyway, either way, the man finally outed himself, and I still believe that that takes a whole lotta balls in Hollywood, especially when you have a career that hangs in the balance, one that highly depends on whether women think you’re sexy and wanna have your baby.

When looking for a suitably “Classic Ruby” article to share with you guys on this Ricky Martin thing, I came across this one. Quite frankly, it was perfect. Because it brings up this idea/issue of gaydar, about it’s effectiveness, and about who does and doesn’t have it. Personally, I HATE the terminology, and I think that any person who can peg somebody’s gender with 100% accuracy 100% of the time is a serious loser with no real talents or abilities and waaayyy too much time on their hands That’s not to say that there aren’t some cues that can be used to identify somebody as straight or gay, but quite frankly I know a couple people, one who is an ex-boyfriend actually, who have (and probably continue to) been accused of being gay. They aren’t. Actually they’re extremely heterosexual, but people are using the wrong cues to help them judge these guys.

Just yesterday I was chatting with one of these friends, and I can’t remember exactly how it came up, but he mentioned that some people think, at times, that he’s gay…Really? I wondered to myself. I don’t see it. Perhaps because I judge sexuality on different aspects, but he seems pretty damn hetero to me. Maybe it’s just cause my gaydar has never kicked in around me. LOL. Gaydar. Wow. SO happy I found this article.

Latin pop star Ricky Martin‘s formal announcement this week that he is a “fortunate homosexual man” came as a surprise to few, and, in fact, provided a celebratory “I knew it!” moment for the sizable swath of humanity that revels in sexuality speculation.

There have, it seems, always been celebrities —or friends or co-workers, or aunts or uncles—that we know, in our heart of hearts, are gay or lesbian. They just refuse to admit it, fueling our curiosity with a stubbornness grounded in fear of being discriminated against or damaging an established career.

But research shows that people who remain in what’s known as “the glass closet” are fooling only a small slice of the populace, and that human beings have a staggeringly good ability to judge which way a person swings. 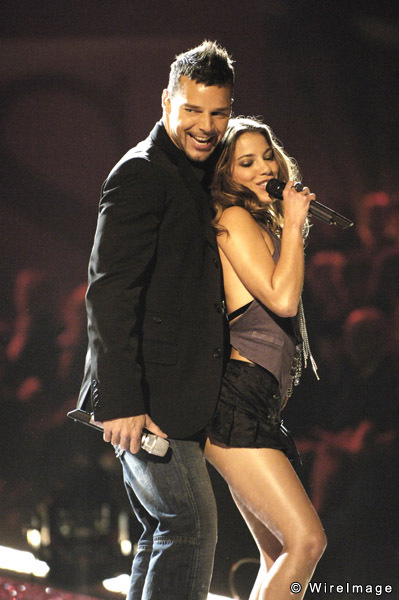 “We’ve found that ‘gaydar’ has quite a bit, if not perfect, accuracy,” said J. Michael Bailey, a Northwestern University psychology professor who has researched people’s ability to guess other people’s sexuality. “We’ve done studies where we’ve brought people into the lab, videotaped them describing the weather in Chicago, and then brought in other people to watch the video and judge them. And they’re almost always right.”

Many who judged Ricky Martin’s sexuality certainly based their opinions on his behavior as a performer, as well as other mannerisms they would see in interviews. Bailey agreed that most of those perceptions are based on stereotypes of gay men.

“Stereotypes are often at least partly based in truth,” Bailey said. “It reflects what we call gender non-conformity in gay and lesbian people. On average, gay men tend to be a bit feminine and lesbians a bit masculine. That’s on average and not every case, of course. There are gay and lesbian interest patterns.

Certainly acting, dancing and singing are interests that are more common among gay men than straight men. Obviously not all actors and dancers who are male are gay, but there’s a higher than average number of them that are.”

In recent years, a number of celebrities long suspected of being gay have left the glass closet: Neil Patrick Harris and Lance Bass, as well as American Idol singer Clay Aiken. Harris and Bass cited intense Internet speculation about their sexuality as one of the reasons they decided to come out.

These revelations can only up the confidence Americans have in their gaydar, raising the stakes for others out there who have long been the subject of sexual-preference speculation. Tom Cruise. Richard Simmons. Anderson Cooper.

“People are just intrinsically interested in each other’s private lives, including their sexuality,” Bailey said. “Particularly when they feel someone might be hiding something.”

There’s also a far greater acceptance of homosexuality, both in Hollywood and in American culture in general. Which allows someone like Martin to leave the closet behind and state publicly: “I am very blessed to be who I am.”

Hope you enjoyed it. It was interesting though, no? What do you think? Did you breathe that sigh of relief, like “FINALLY he came out” or were you actually secretly crushed, having been one of the crazies who harboured high HIGH hopes that he was dead straight, or that she can make him so? If you honestly believe you have gaydar, what do you do when you’re in somebody’s face and they are ASSURING you they’re not gay, but your gaydar is sounding?