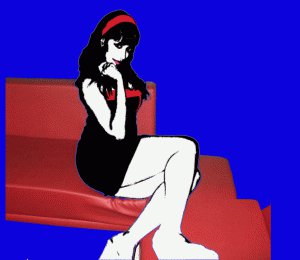 Here is another Classic Ruby original short story. Only the twist is that I’m only giving you guys half of the story this week. If you wanna know how it ends, you’ll have to tune in next week Wednesday to find out. But without further ado, I present to you:

She watched listlessly as droplets of wine ran lazily down the wall and finally settled on the wooden floor, creating a pool for the jagged bits of crystal collected there. She had replayed the night over and over in her mind, analyzed it from every angle, trying desperately to recreate the situation so that it didnt end in this way, but to no avail. Suddenly, it occurred to her that she was still curled into a ball in the corner. She didnt know how long she had been there, in exactly that position, but she assumed that she hadnt moved since coming to rest there. She felt the cramping in her legs and stretched them out, grimacing with pain. It seemed she was destined to live in a world of agony. Exhaustion caused her to relax her neck and allow her head to rest against the wall. A fiery pain shot down her spine and across her shoulders. She hadnt realized just how tense her body had been, how on alert she had inadvertently kept herself. She allowed her shoulders to sag and closed her eyes, focusing only on the sound of her steady breathing, and the feel of her chest against her silken, bloodstained blouse as it rose and fell, lulling her to sleep. Her eyelids fluttered and a tear slid down her cheek, matching the wine drops in pace and size. The wall was crying for her she thought, crying for her fear, crying for her shame, crying for her torment. She was deliriously tired, but she couldnt risk it. Not yet. Not yet. Another tear slid down her cheek; when the hell did she get into this mess?

It was a question she often asked herself, as this hadn’t always been her life. In high school, she was so well liked that she was crowned high school prom queen three years in a row. There had always been something magical that emanated from her that the world seemed to find infectious. Nobody could settle on what exactly it was about her; surely, some said, it had to be her thick, long, dark brown hair, the only one in the school who had natural hair past their shoulder blades. Others were positive that it was her large ebony eyes, reminiscent of a does, her luscious pink lips, and her perfectly chiseled face that did it. More referred to her beautiful laughter, like listening to the tinkling of a bell, her quiet, humble demeanor, her charming smile, and her good nature that drew in everyone that encountered her. This was a debate that never seemed to be settled, but it never really mattered, for just when one was convinced of the veracity of their beliefs, theyd have another encounter with her and what captivated them this time was entirely different than the last. So at the end, one would just determine that there was just something about that girl, and leave it at that, and the next time they saw her they would allow themselves to be mesmerized by her without trying to figure out exactly what it was about her that affected them that way.

On days like this, her mind often retreats and hides in those memories. The times when life was kind to her, and she was bright and cheerful, when she was positive her life was going to be wonderful. Her first prom experience brings a particular joy and comfort, and often times to keep from screaming, she thinks back to this time. One of the reasons the very first prom was so special was because it never should have been. It was near the end of the tenth grade, so she wasnt even invited to the prom because prom was only for the eleventh and twelfth graders.  Imagine her shock when s found out that she had been nominated as prom queen that year! It was for eleventh and twelfth graders only, and yet there she was, for absolutely no reason she could fathom, nominated as prom queen. If she had a more popular name then she would have just assumed that they werent referring to her. But her name was one of a kind in this school; Aiyanna Moore, so it had to be her. Later on that day, much to her surprise (although she had to admit, her delight as well) at lunch, she had six seniors ask her to the prom at the same time. She picked the one that looked less likely to upset her dad, a boy named Anthony Tate, and anxiously awaited the end of day bell so she could run home and share the good news with her family.

The weeks leading up to the prom had been frenzied. Trips to the finest shops to find the perfect gown and afterwards to have it fitted perfectly. Consultations at the most renowned salons in the city to find the perfect hairstyle, make up, and nail polish. Nerve-wracked phone calls between Aiyanna and Anthony to coordinate their outfits, corsages, and other little details. It almost seemed a relief to her when prom night came and she no longer had to prepare for what she had imagined was to be the best night of her life thus far. Butterflies seemed about to overwhelm her tummy, and she could barely catch her breath. What if she won? What if she didnt? What if she did something ridiculously embarrassing during the prom, like trip over her own two feet while walking with her cup of punch, and ended up spilling it all over her perfect, lavender dress? She almost considered hiding in her closet until the day was over, but then there was Anthony ringing the doorbell, and she was walking down the steps, and her parents were taking pictures, and then they were out in the car.

“You look absolutely amazing tonight Aiyanna. I, uh, just wanted to, uh, thank you for, uh, thanks for coming. You know, I mean, like with me, and not, uh, you know, thanks” Anthony stuttered out after a few minutes of silence.

“Thank you. Im honoured you wanted to go with me. I think you look very handsome tonight”. Aiyanna never noticed the look of absolute delight on Anthonys face at her words. She was too busy looking out the passenger window and scowling at herself. Couldnt she have come out with something better than that? She had sounded so rehearsed, so insincere. God, sometimes she could be such a loser. But then they were pulling up to the hall where the prom was taking place, and as they joined the queue for valet parking the butterflies came back in full force threatening to break through her tummy and spoil her beautiful new dress.

“God I’m nervous”. She thought she might pass out.

“Dont be. Youre all good. You got it down man. Be cool” Now it was Anthonys turn to look at the window, mentally kicking himself in the ass. Are you serious? He asked himself. You told her shes all good? You called her man??? God, pull yourself together, he chastised himself, shes not one of your buddies for cripes sakes! If he had looked over at Aiyanna he would have seen that his words had had a placating effect on her, and that she was looking a little less chalky than before. But instead of looking at her face, he looked down at her lap, at the small delicate hands and the beautifully manicured nails. He blushed when he realized that he wanted to hold her hand. He was shocked at himself when he saw that his hand was actually reaching out to grab hers, to give it a firm squeeze. Then he looked up into her eyes and gave her a reassuring smile, winking at her because she filled him with such a playful joy. He hadnt known that that wink would have made Aiyannas heart skip a beat. In that moment, she realized that she liked him, a lot. She hoped he felt the same.

She had begun dreaming of the whirlwind of faces and emotions that the prom had been when  suddenly she was jerked back into consciousness by a loud bang. Her first thought was that she had been shot, but after a few moments when no pain came she gingerly cracked her eyelids. Nothing. She scanned the room as surreptitiously as she could; only moving her head a fraction of an inch either to the left or right when she could see no further to those directions using her peripheral vision. Still nothing. So she was safe, or at least for the time being. She hated being in the apartment alone, it always made her so uneasy. For a while, she couldnt quite remember why she was sitting in the corner of the living room, the hardwood floor causing everything from her lower spine downwards to go numb. Then she took in the room. It was in chaos, coffee table overturned, its glass top shattered in pieces on the floor. The couch was askew, the pillows scattered on the ground. All of the pictures and knick knacks she had set up so lovingly around the room and on the mantle were on the floor, some simply cracked, others so badly mangled they were entirely unrecognizable. None of this made it click for her. Then she noticed her husbands crystal goblet, shattered save for the intact stem, lying on the floor against the wall opposite to her. She noticed the white liquid pooling around a cluster of shattered pieces and thought instinctively, wine.

She saw blood in the middle of the room, unmistakable in its colour and consistency. Even from here. She looked frantically at her hands, her arms, her legs, her stomach. She felt around her back, but still nothing. She decided that it must have been her husbands.

Wonder what happened? Wanna know what the blood is from? Wanna know how Aiyanna’s story ends? Tune in next Wednesday when I give you the end of the story!

[Editor’s Note: Since next Wednesday has come and gone, rather than make you search all over the place for part two I’ll just provide you the link to part two, which is right here.