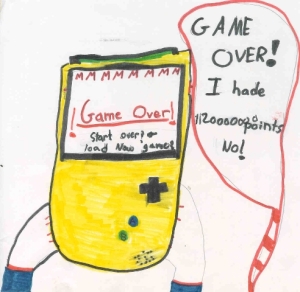 With Ruby, you’ll find, if it’s not one thing, it’s certainly another. Either way, it seems that each and every day is an adventure filled with pitfalls, danger zones, enemies, and a couple power-ups along the way to keep me from actually dying. Juuuust enough that my life won’t actually be at any serious risk of being lost (especially not that permanent “Game Over”) as long as I keep my wits about me and am always on the search for secret hidden spaces, rooms, and tunnels. Just as in video games (in case you weren’t fully catching my analogy), I find personally that you can do MUCH better when, not only do you not know what the hell is going on, but that you also don’t take it (or yourself) too seriously. I remember being younger playing Super Nintendo with my older cousins or Uncles. They all HATED me in any fighting, driving, or racing game because even though I didn’t have a damn clue what was going on with ANYTHING somehow or another I managed to kick their butts. Everytime without fail. Normally pulling some amazing well coveted secret move out of my ass in the meanwhile.

But what they didn’t realize my power was is that I don’t care!! Seriously I don’t. I don’t care if I’m making stupid faces while mashing down all the keys. I don’t care if my little character on the screen is dancing around like a moron and getting his ass handed to him. I don’t care if I can repeat that super cool-tastic move again. And as a result of all my not caring I managed (and still do really) to kick the crap outta anybody who was up against me. It’s kinda like playing chess against somebody who knows how to play chess versus somebody who only knows how the pieces move: you can never predict what they’re going to do, or what strategy to use against them, or even what strategy they’re gonna use against you. Because there isn’t one. They’re just out there, not giving a shit, and moving the pieces around, proud of themselves they remembered which way the horsey moves! Seriously, think about it, you’ll watch a grown-ass woman giggle in delight and clap her hands when she remembers for the first time how to move the “horsey” and if you were to make fun of her the most she would say by way of defense is “shut up” but that certainly wouldn’t change her behaviour…at all. Because when it comes to chess, in this example, she doesn’t take herself all too seriously.

And you can apply this “don’t always prepare and strategize” and “don’t take yourself too seriously” thing to MANY things in life. For example, I was just recently in a pretty bad car accident (details should follow soon…I’m doing a little piece of research for it, so it might be a minute lol) and I told everybody, I didn’t know the accident was going to happen so I had no time to prepare or ‘brace’ myself, and I certainly didn’t take what was going on inside the car particularly seriously. I was pretty damned excited at the time…I said “Oh shit!” when I saw the airbags deploy as I had never seen this in real life, and then while the car continued to spin I kinda pushed the puffy bag down and smiled to myself…I didn’t have long to do this, because as soon at the car stopped the first thing I noticed was that my lungs/ribs and my knee hurt, and the second thing was that the car was filled with smoke and debris and I needed to get the H-E-Double Hockey Sticks outta that car and breathe in some air before I suffocated. And even while in shock and everyone asking me if I’m OK, the only think I had to say about it was “I’m not sure yet….I’ll let you know when I stop feeling hysterical and shaky!” all with a wink and a smile. Truth was, I was all of the above, but I figured by making a joke and calming them down I was helping myself remain calm..

This actually helped because eventually I did stop hyperventilating lol. And I heard that I would have been in SO much more pain had I had time to brace myself and tense my muscles up before impact, or if I had been trying to do some type of protective strategies or positions in the car before it came to a stop. So not knowing what the hell was going on was certainly a benefit. As was me deciding not to take myself, or my smashed to smithereens car, too seriously.

OK, sorry I missed Monday but I was still in waaaaayyy too much pain to do any typing. As it is, I’ve pretty much exhausted myself at this point. Sad I know. That’s whiplash for ya.

2 thoughts on “Don't Take Yourself So Seriously”