You know, as an individual I try to be very open minded and accepting of things that don’t fall within the mainstream. But when a friend told me of the newest fashion trend/disaster I couldn’t help but say “are you shitting me?”. And for those of you who need to be caught up, we’re not talking about the cultural skirts or kilts to be worn at official ceremonies. And no, we’re not talking about somewhere far far away, like in Europe, where it will seem uber neat and foreign and different, but ultimately won’t be something more than a sight to see while you’re on vacation. And it’s not going to be some ridiculous concept spied on the fashion runways, certainly an eyesore but ultimately no more a risk of becoming reality than watching the boogeyman in a movie will make him appear under your bed in real life. Nope, this travesty is a fashion skirt for North American men. Soon to be hitting popular clothing stores in North America, one of which will be H&M, which will be debuting this little fashion tragedy in their spring line.

1–>WHY?? And this question, although only 3 letters has a whole lot of aspects to it. It can mean, why would they think this is a good idea for North American men, why would a man want to wear a skirt, why couldn’t they find some better way of exploring with fashion…geez, I could go on and on with this one, but lets move on to question number

2–> WHO?? As in, who told ANYBODY this would be a good idea (seriously, if you have leads let me know) which is also connected with who THOUGHT this was a good idea, who is going to be wearing this fashion, who will be attracted to men in skirts, who wants to be wearing a man skirt… 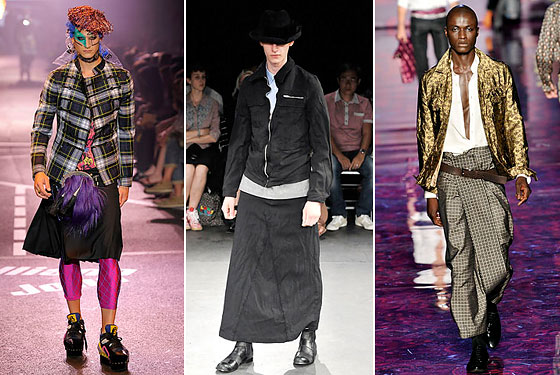 Again, too many questions, and there just aren’t enough answers. There just never will be. Ok, seriously, on the man’s point of view for 5 seconds – is there any STRAIGHT male out there who will be wearing their nice little khaki skirt to work on a Monday, or maybe out to a nice restaurant or to chill out with some friends? For these men, what happens if you get an accidental boner with this skirt on? I mean, do you just walk around with it VERY OBVIOUSLY at full attention until it dies down, much like society has had to do with women’s nipples? Do you wear boxers, tighty-whities, boxer shorts, or go commando? If men wear skirts now, on a cold day do they wear tights under the skirts? Do men have to shave if they go bare legged, just like women do, or do they get some kind of special pass because they won’t be turning ANYONE on in those skirts anyways so who cares what they’re wearing? 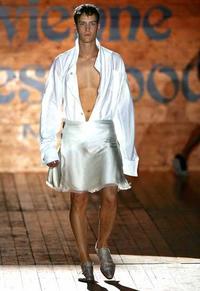 See? SO many questions. SO MANY!! Like, on the straight woman tip for 5 seconds: when you check out a dude in a skirt are you like “OMG he looks SOOO hot in that!!” or do you think to yourself “ummmm…he looks like some kinda freak!”? Just wondering. If you’re one of those “to each their own” kinda women, if your man decided to start sporting a skirt, will you go out in public with him? Would you start wondering about his sexuality? Would you still feel as sexually attracted to him? You’d be pissed if your best girl friend showed up to a party in the same outfit as you, but what about your best guy friend or boyfriend? If this skirt thing catches on, would you want a man to shave his legs if he was going for the skirt style, or just keep it hairy and au naturel? Have you ever fantasized about getting your man into a dark corner of a club and flipping his skirt up to give him some oral action? If you did flip his skirt up, what kind of underpants would you expect to see?

Ok, let me off your the Classic Ruby opinion on this, in case you haven’t guessed…its HELL NO!!! Men in skirts is not sexy. It’s just not. Not the thought, not the sight, not some random idea. NOTHING! And what would I do if my man were wearing a skirt? I wouldn’t being doing a damn thing because, quite frankly, no man of mine will be hanging on to my arm wearing an outfit that could have come from my closet. Seriously, I have an issue with stand-alone pink shirts and skinny jeans (as separates – *shudder* just thought of them together on a man coming in for a …*throws up in mouth a little*) so obviously to me this skirt thing is going waayyy too far.

What’s wrong with men wanting to be a little masculine and women wanting to be a little feminine? And what’s wrong with me thinking that things should be that way? I mean, I am all for men being allowed to be in touch with their emotions and to be able to do things like cry publicly and express their feelings, being stay at home dads, etc etc, likewise I am all for women being allowed to work whatever job they so choose (as long as they can manage the load – I say the same thing about men who aren’t very physically active or fit – just common sense, nothing to do with sex), being strong and independent and not needing to rely on a man to take care of them. But I don’t see what’s wrong with men still maintaining some of the things in our culture that we deem to be manly, like a stronger, more sturdy looking exterior, while women maintain looking somewhat feminine with things that still allow them to be soft and tender?

Ok, in all fairness, I think this is the most ridiculous investment any clothing store can make because, quite frankly, I just don’t think the demand is there, and more importantly I just don’t think there is anything that the media icons, designers, clothing stores, etc. can do to make this fad catch on. I think this is going to be comparable to the New Coke fiasco (only I’m sure stores like H&M had enough foresight not to just outrightly stop producing men’s pants, and I’m sure they also had enough foresight to make sure that these were some added sides, not their bread butter and meat and potatoes) where some trendsters are going to buy simply because they have some sick compulsion to be at the top of every fashion trend even though they secretly hate most of them, but for the large majority man-skirts will still remain something that is extremely laughable, at best.